Where was I up to? Oh, yes, I’d just played Newcastle with Neil. And as I speedily snook through the night as the only car on the A19/A1/A59 I felt a strange sense of exhilaration and isolation in speeding unchallenged around roundabouts but thinking no-one would find me for hours if I swerved off the road. A stately barn owl was spooked from its perch on a road sign as I slipped off the Harrogate road roundabout, and glided along side me at window height, I looked toward it briefly and it turned its head to face me, a brief couple of silent and beautiful, moving at around 35 mph, seconds. 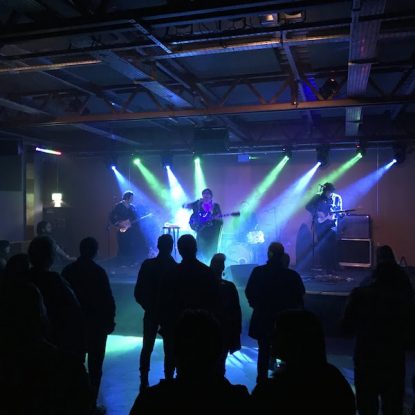 The following night I’m due to play The Brudenell Social Club in Leeds, a place I know well. Many of my first shows in the early to mid naughties were here. Nathan is always welcoming. This time I get to play in the brand new ‘community room’ and I am also allowing Paul Marshall to join me on stage with his favourite toy, an OP-1. Paul and I played a number of folky shows back in the day. Much of this tour is a nostalgia venture.

Nathan has kind of double booked with Kid Congo tonight, so we play a ‘co-headline’ show – tickets on sale for both shows but they get to see us both. I play first and the Kid plays second, in all his fruitiness. With the short notice about this event there’s not enough time to be annoyed by anything, we just roll with it – the Kid’s band and Paul and I are consummate professionals and wear the evening with dignity and kindness, pleasantry and understanding. As always it remains true that people are mostly decent, and if you are decent to people they are decent in return, all this is just to say they were terribly nice guys the lot of them, Paul Marshall included! Thoroughly worked – a shame the crowd was a little thin.

Reconnecting with old friends and discovering the beautiful ways that life has taken people. 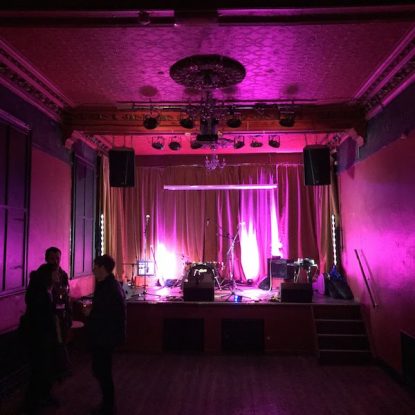 The next show is probably the most out-of-body of the tour. Unlike the dreamy state I was left with by of much of the other dates, Manchester turns surreal and just, I don’t know. Under the threat of heavy snowfall, I find my way into Manchester and Gullivers, depositing my wares and finding some place to park the car. Setting up and sound-checking with Former Bullies was great, and the sound-check sounded tight and wondrous when they jammed with me. Former Bullies and I played one of my first shows in Manchester, back in the old student town Trof I think, in the way-back-when of the naughties. More nostalgia.

First off, the FB set was nice, but then my set the ideas of sound-check went thoroughly out the window as nothing clicked like we’d hoped. When FB’s snook off, for some unknown reason Tom Settle didn’t make it off stage, instead crouching in the corner of the stage for the rest of my set. The finale was a bizarre fizzle. An audience member collapsed, and I stopped to allow some space to see to them. A silent room solemnly filtered downstairs, leaving me and a small group of water bearers and supporting arms to tend to the faint punter. We decided it was the end of the show. Zero applause and bemusement. Some mutterings of a staged happening, did I arrange this episode to further confound my audience. Who knows? Also, is drinking a half a Guinness like not drinking at all? 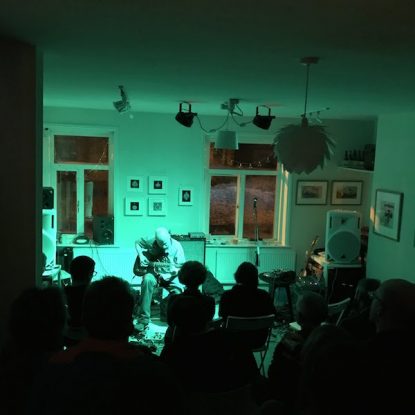 The following day is a widely anticipated show at The Triangle in Shipley. Gavin and Harry who I’ve known since the early naughties, Harry putting on a number of my first shows in any around Burley and Hyde Park in Leeds, and Gav being a cohort in a crowd I tagged along with to the early ATPs. Turns out they could have sold out the place a second time if we’d been confident. Anyway, a nice crowd assembles in the upstairs gallery space which has only just been knocked through and refurbished. Dean McPhee sets up his amp and array of pedals. He’s bringing his etherial spacey folky guitar into my set too. My old pal Stu Bannister sets up various microphones and percussion bits, based around a child’s kick drum. The minimal sound system allows for no monitors, and we’re all in a row with not really much chance to get a good ear of what everyone is doing. It brings a very intriguing quality to the show – sometimes we come together and other times we are each on a separate path, with Stu veering into his own tempo, the swells and winding paths of this show are pretty dreamlike/nightmarish at times. I think the loveliness of Deans guitar ties the thing together.

The next few days are a chance to rest and spend time with the Yorkshire family before our Christmas in Wales. 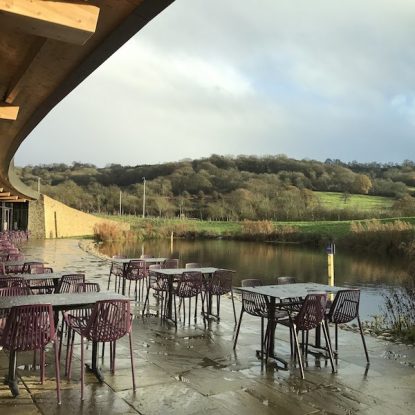 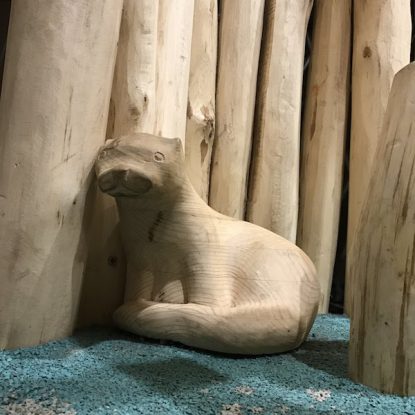 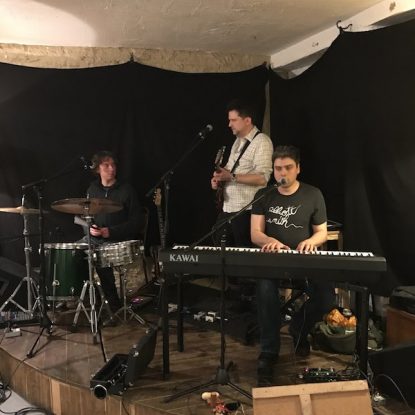 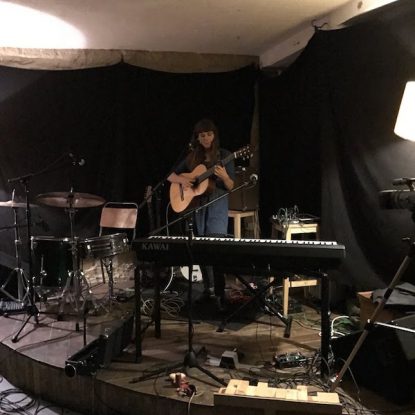 The following week we are making our way down to Bristol, rushing to make lunchtime at Gloucester Services. Oh the touring life! There is a decent place for Tomo to play, and you get a child meal for a quid with your adult one. Good deals. In Bristol we are staying in the premier inn or whatever, at that big roundabout at the bottom of the road that Kino is on. Cafe Kino is a lovely venue, and a good size. I think it’s pretty much sold out and comfortable. It was really great to see Rachael Dadd, and have her open the show. And then Landslide Purist play – and a great set, the combo of Sam Wisternoff’s lyrics and the relentless piano of Sean Talbot bolstered by Robin Allender’s lush guitars makes for a immersive listen if you give it time. I’m so grateful to have Sam., Rachael and Robin sit in with me. It’s one of the most enjoyable bands of the tour and the set just seemed to work perfectly! Clarinet, electric guitar and percussion. I added some squeaky shoe floor work again, the room asked for it!

I retired after convincing all to have a nightcap with me at the pub down the road. 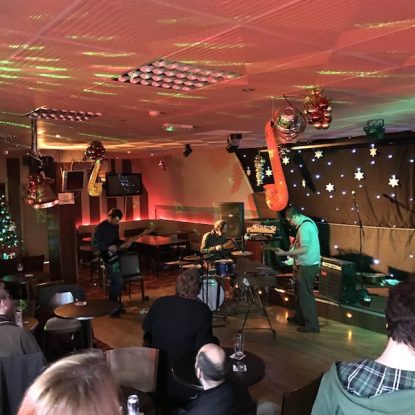 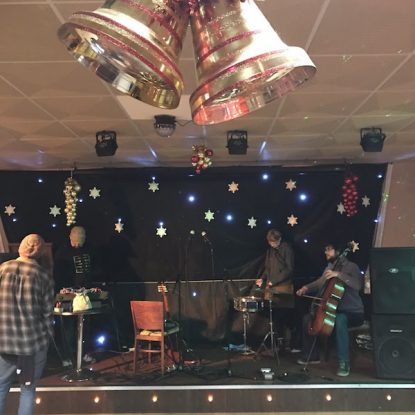 The final show of the tour is in Cardiff, prior to our retreating to West Wales for Chrimbletide. I deposit Katrine an Tomo in the hotel and drive round chez Joy Collective. I drop off some stuff and get the car back to hotel, and walk to the venue. It’s lovely to play in such a place – I’m nostalgic for TfL now. The oddness of christmas decorations including inflatable saxophones. My bemused band tonight is three-headed. The award winning Welsh musician, Gareth Bonello, who swaps his usual finger-picking folk guitar for his cello. The multi-talented Totem Terror that is Oh Peas! aka Rosie Smith, fresh of tour with Euros Childs, who plumps for percussion today. And last but not least, Andrew Paul Regan (aka Pagan Wanderer Lu) who has rigged up a modular synth for the occasion, with the idea of taking feeds from my guitar and vocal to fool about with.

Slipping over from Engerland to open the show are marimba, drum, guitar, post-rock whatever, Motes. A really great band to end the tour with. A new find for me, but seems we have a few friends in common.

Despite the sound not reaching far out of the muddy, with vocals not seeming to brighten, technical set-backs for Gareth and a small but dedicated audience, the results are often astounding. We managed to make space for some beautiful moments for Gareth to come through, and he did a great job duetting with my squeaky shoe dance on the polished floor. The bed of manipulated noise and subsequent swells, and the fannying about with my guitar feed etc was inspired at times but not overwhelming –  well done Andy.  Some sturdy percussion tied things together. A mild sense of relief and more of odd emptiness.

The tour is over.