Collect hire car for a 2-month rental. Speed round the M25. Have a night to cuddle my family and have a rest before the first show. 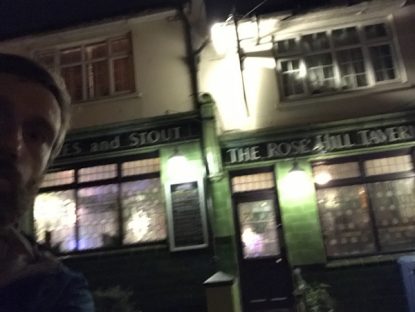 Head to Brighton the following day. Hey, have you heard of the Rose Hill? It’s ever so lovely! This is the first of my efforts to cajole some acquaintances into performing with me – and this night will prove to set the bar very high indeed! Marcus Hamblett was my saviour in rounding up the team. Team DTB tonight is MH himself – on crutches (not playing them – his chosen device is guitar), the dear Tristram Bawtree also on guitar, Alabaster dePlume on saxophonical (he also opened the show with his ascerbic and poignant socialist ranting), the wonderful Emma Gatrill on clarinet (through effects board) and marvellous Tom Heather as drummist. I couldn’t have asked for a sweeter bunch. It sounded like we’d had a week of rehearsals, most of it just worked so perfectly!

So, verily boosted by that, I zoom back in the pitch dark of Sussex for a sleep, narrowly avoiding running down a cyclist who’d chosen, in the middle of the night, a foggy night, to cycle with no lights or reflective clothing. 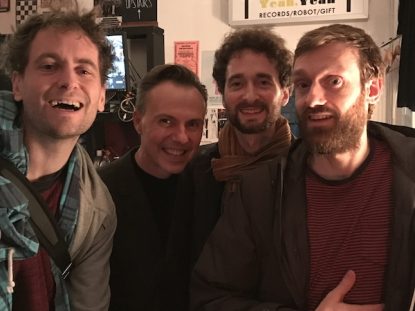 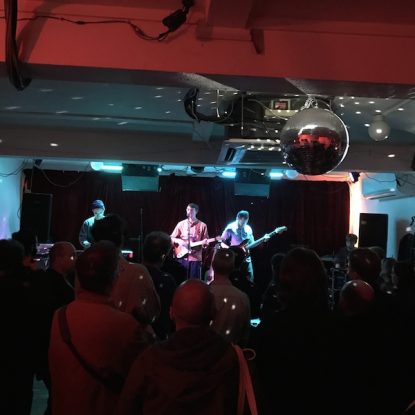 Headed for London the next day – I meet up with Danny Green, who has agreed to jangle his guitar tonight, we have a pizza and discuss the oddness of what we do, prancing about in front of people with daft songs what we writ. But hey, people come to see it so can’t complain getting the opportunity to do something you enjoy so much. Also agreeing to form tonights band is Alabaster DePlume again – he’s residing locally so just a stroll for him to get to Paper Dress Vintage in Hackney, and The brilliant Jonny Bridgwood and Howard Monk – as you may recall they we’re my band back in 2009/10 for the Outbreeding record and surrounding live shows. Wow, this turned out to be a high energy performance to a packed room and thoroughly enjoyable -the band absolutely nailed it! The night was opened by FELL, the brainband of Nicolas Burrows, one of the nicest chaps to sport a moustache. 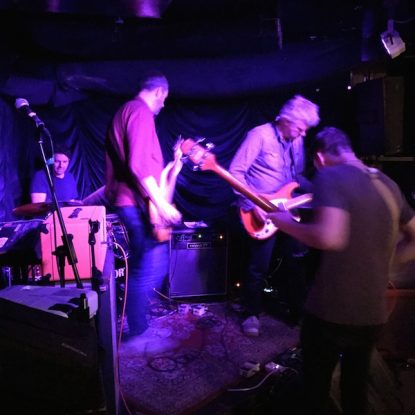 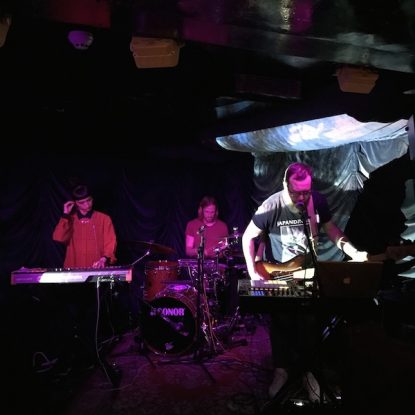 I have a show tomorrow in London and thought the drive back to Sussex where the family is was a bot of a waste if I have to shoot off in the morn – I am kindly housed that night by my old pal from University, Leon, who inadvertently keeps us up chatting until the early hours. The next day I move the car from the soon to expire parking space, and drive up to near Tufnell Park where I pop in to see Beth and Sam, giving them their copy of the record they guest on. And strolling up the Heath for the sunset. The venue is just round the corner. A smaller space and a chance to see creaky old-timers Billy Mahonie show they still have the post-rock grooves and moves! Also playing is electro-northerner Seckar, with synth melodies and smart beats. My show was a little more ramshackle, but fun nonetheless! A sneaky cameo from a hunched-over fiddle player who crept in and crept out (a particularly enigmatic Sam Amidon). Guest guitarring from Billy Mahonie’s Gavin Baker. Plus some vocal noodles from soprano Sarah Dacey and producer, beatboxer, general good egg Matthew Ker (MaJiKer). I night-drive once again back down to Sussex – It’s a nice thing to be able to come back to the most bestest two humans in the world so sweetly sleeping and lie down to sleep soundly with them. 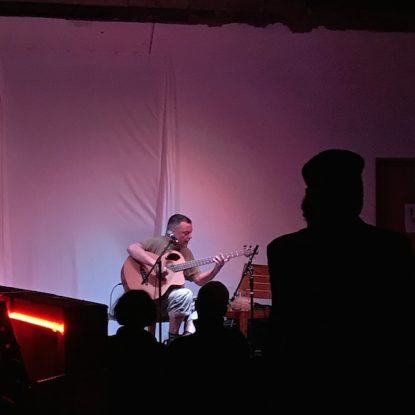 The following day is a trip to Hastings. I’m getting to catch up with decent chaps, Greg Butler (director of the film about me) and Chris Broughton (no relation) who have been superb at arranging and promoting a beautiful gig at The Printworks. Friend Howie Reeve happened to be touring the same time with the opportiunity to cross paths here – I invited him to play a set and he opened the show. What a brain pecking delight. You must check out his records – even if ony for the beautiful sleeve artwork! Local Otti and the Voices performed a set. It was a wonderful night even with the bellows of laughter from the chatterers downstairs. 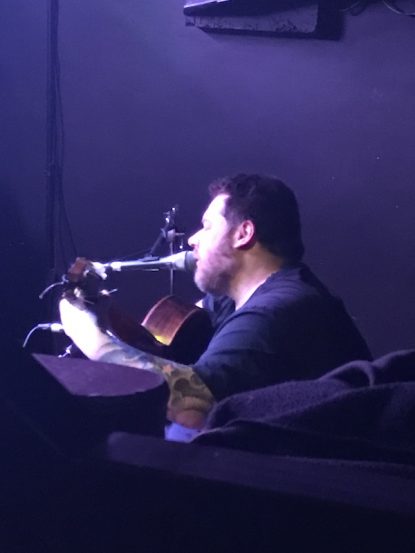 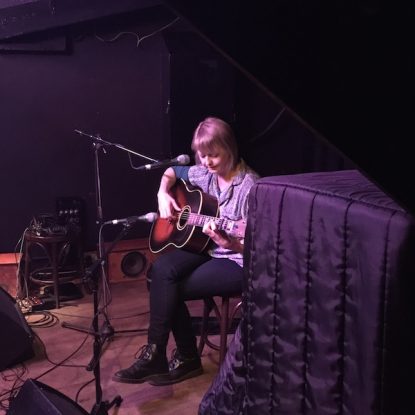 Sunday daytime is another London jaunt. A matinee show at the cosy Servant Jazz Quarters with Nancy Wallace, proper english folk, and RM Hubbert, proper Scottish bloke. it all seems too brief. Hubby has to shoot off before I play, but not to worry I will catch him in Scotland as he’s promised to join my band! And Nancy too has something she has to get to, long time ago I used to play a few of the early London shows organised by The Local (Howard Monk) with Nancy. Busy sundays. Nevertheless, I enjoyed this, one of a handful of solo shows on this tour.

Monday is a rest day, but of course I’m in mid-tour head and can’t stop it spinning with thoughts of what’s going to happen and what already happened. 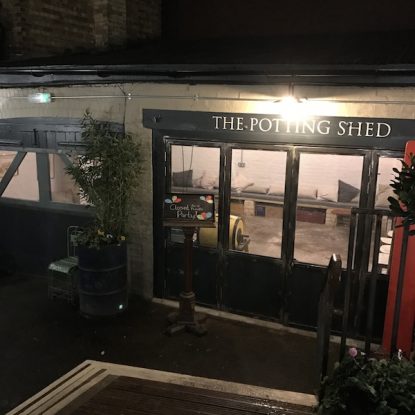 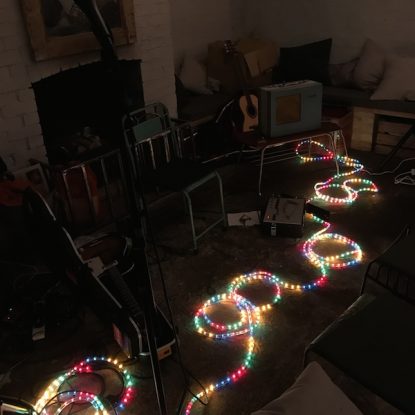 Tuesday we set off as a family up to Cambridge. I don’t think I’ve been here as a performer since I played a show at the Portland Arms as stayed in a Uni College eating breakfast in the dining hall with students and professors and whatnot. We’re staying at The Waterman as well as doing the show in the potting shed attached to the back of it. Dan Carney stepped in to get this show together for me, I’d not seen him since around 2005 or 2006 or something when he was part of the band I Had An Inkling. Anyway – a thoroughly nice chap, as is his pal C Joynes, not-so-fresh from the plane from Bangladesh, who opened the show with his inspiring amped up folk guitar. I learn that Euros Childs and Rosie Smith (who will join me in Cardiff) are playing at that old Portland Arms right across the road so I pop in to say hello before I play. I joked about them having stole the audience but my little 30 person capacity room fills up.

In the morning we had a lovely veggie breakfast included in the accommodation. Have a bot of time to run around Jesus Green with the little rascal, kicking up the autumn leaves, and tickling the posh drunks swigging rosé from the bottle at 10am. 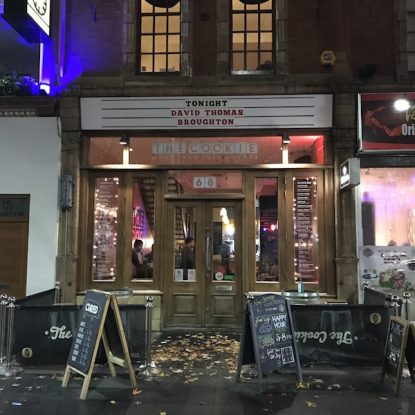 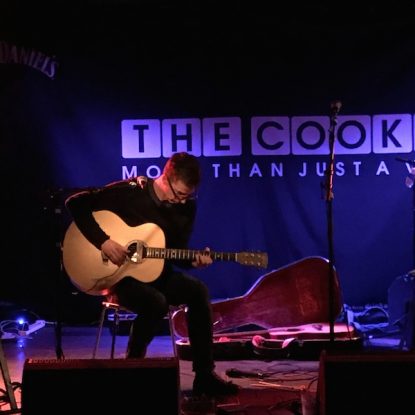 We only have a short drive up to Leicester for the next show. I’ve been put on as a ‘Her Name Is Calla presents…’ by good chap Tom Morris. He’s agreed to have local soundbuilder Peter Wyeth and Adam Weikert (from his band) play a set each to open the show as well as jam with me – as a surprise extra another Calla member, Thom Corah, strolls on with his trombone! Adam bangs some loud keys as well as all the atmospherics he and Peter inject, makes for interesting listening -I think I played a little too long for the small crown that had gathered on this drizzly night. Must mention that The Cookie is a great venue though, and we were staying in the Travelodge just a few steps away, which made for a very convenient night (I was able to have a beer despite promising myself a dry tour!). 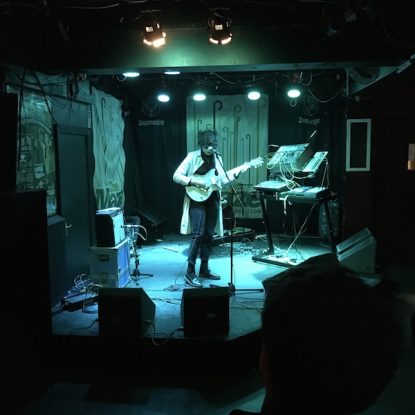 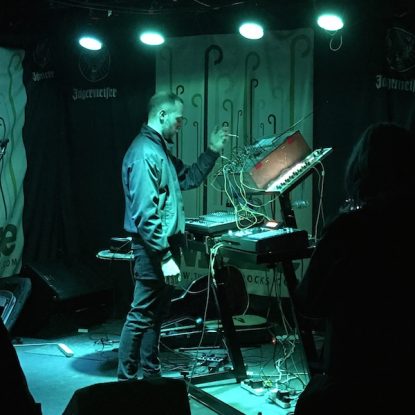 Although the next show is only in Nottingham I’m driving up to Otley to deposit Katrine and Tomo – She has an thing to go to in Leeds so Grandma is called upon to look after our little tot. Not long after getting up to Otley I set off back down the M1 to the Maze – so I barely skim the edge of Nottingam really. This will be another solo show, Chris doesn’t want to try and play with me and I had totally not been organised enough to ask Katy. They had organised two other acts for the bill, and what lovely treats they were too, Polly Hardy was a great sparse guitar and voice melancholia performance smoky tones. Giant Head wielded a great heavy synth rack and pounded our guts with heavy beats, wild twiddly bits and profound rapping. Actually really great!

It’s a fast ride up a lonely M1 back to Otley for sleeping.